The 12-year-old Emilė says she feels aggression towards her mother. She is different from all children’s mothers. “She doesn’t take care of me, does not communicate with me, doesn’t interfere in my life,” says Emilė. Emilė has a clear opinion on how her mother should bring her up and how she does not do that.

Her mother says that once when Emilė was one year old, she started crying until she turned blue and stopped breathing. These attacks kept repeating whenever Emilė got nervous. From then on, her mother has stopped disciplining Emilė so that she wouldn’t get upset.

Emilė is noisy and has difficulty understanding behavioural boundaries. During conversations, she often interrupts her mother, corrects her and reminds her of various things that her mom says she has forgotten. For example, that her mother no longer attends the Alcoholics Anonymous meetings.

In Emilė‘s story, the Wizard is so fascinated by an apple lying on the road that he gives it the gift of speech. The Wizard enchants the apple and rushes off to do his own things, without bothering to explain to the apple how to live with such a gift.

The confused apple is found by a hedgehog, who invites the apple to stay in its house. The apple is delighted, but the hedgehog’s home turns out to be somewhat sad. A few weeks ago, the wife of the hedgehog disappeared somewhere. To repay the hedgehog, the apple decides to find his wife.

He finds her locked in a glass cage at the zoo. The apple rolls with all its might and hits the cage in order to break it, but only to make noise and wake up the guard. “What’s going on?!” roars the guard running towards the place. “What, what! – cries the worried apple, “A talking apple! – and adds angrily “Unlock the cage quickly!” And to everyone’s surprise, the guard obeys. For he has never seen such a miracle as a talking apple.

And the apple begins to realise what it could do in life with the “gift” it has received. 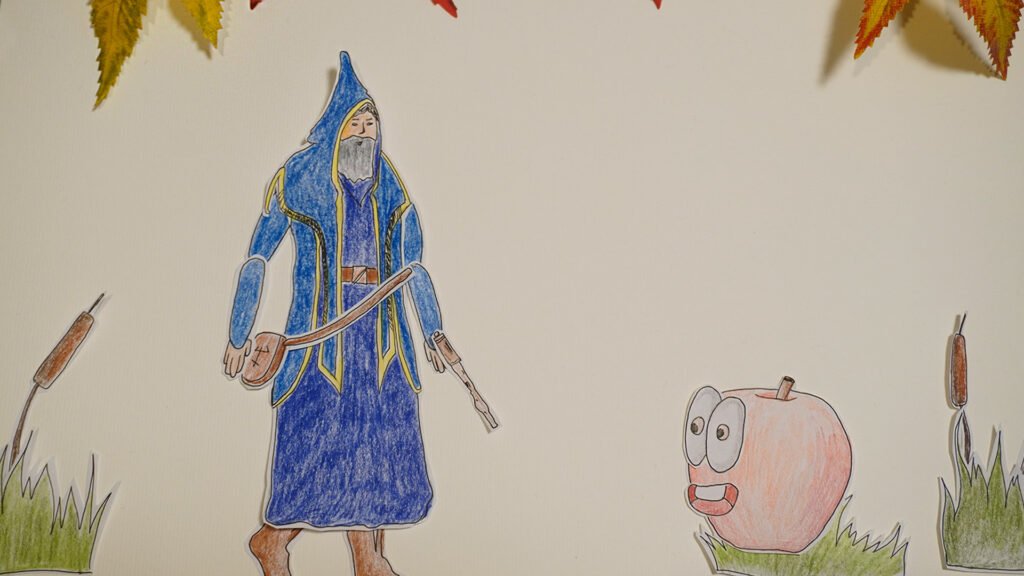